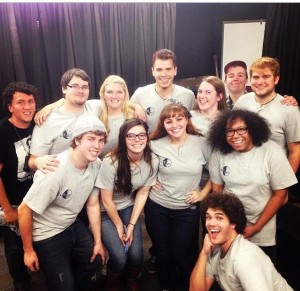 What do boxers, an oath, and a storm have in common other than the fact that I pulled them from a suggestion generator at Can-I-Get-A.com? They’re gonna be random bits in this blog about my thoughts and journey of improv! Spontaneity!

I started improv my junior year of college at NAU, and I was mortified. Improv was something I loved (and still love) to do in my daily life outside of the stage: speaking in an accent at a water park, inserting phrases I would read on signs behind peoples’ heads while we were having a conversation, and choosing different ways to walk around a mall. It was fun, and, hey, it was weird, but it wasn’t something people were coming to watch me do. I remember going and watching NAUghty Bits (NAU improv troupe) shows and having a blast, but the idea of going up there and doing unrehearsed scenes was daunting. However, I mustered up the courage to audition and the floodgates opened. I started out on their short form troupe and did a variety of short form games (ie. Pan Left, Freeze, Laugh and Go, Talking Heads, etc) and later moved on to Long Form. Don’t get me wrong, I love short form, but the model of Long Form we did at NAU was a blast. You’d take about 9 or 10 improvisers, take a suggestion of a location, give us 45-50 minutes for the show, and we would have created this arcing story line that cuts in and out of scenes with each of us remaining as a single character throughout…oh man, I loved it. I’ve met some great friends along the way that are absolutely hilarious, excellent scene partners, and just brilliant in their own adaptive styles. To throw out one name in particular my absolute favorite person to work with at NAU was Carter Conaway, and she and I would keep up the improv off the stage. 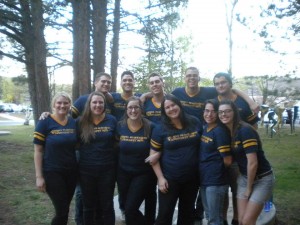 Boxers! My suggestion is boxers! Did you know that my underwear has to match what I’m wearing that day? And if it doesn’t match it is a clear indicator that I have reached the bottom of the barrel and need to do laundry because I’m upset that I’m not being coordinated with my clothing.

Cut to Results May Vary! I found Brelby a couple months after graduation from college, and during the end of my senior year; I didn’t perform as much in improv. Needless to say, I missed the rush you get from a stripped down performance of wits – no costumes and no sets, just good ol’ scene partners and comedy (Or not comedy, not all improv has to be funny. Rabbit hole for another blog). Finding Results May Vary and once again getting the courage to audition for improv all happened at a great time in my life. I’ve absolutely loved working with this troupe, attending rehearsals, and even attending the classes offered for the troupe and other people interested in improv at Brelby. With this troupe I think I actually prefer short form games, which was odd for me. My heart for long form is with my troupe at NAU, and my heart for short form is with Results May Vary. It’s a divided love, but it comes together quite nicely.

Oath! I made an oath to myself my senior year of college to follow my fear and do things that scare me. This isn’t by any means a thing that would put me in harm’s way, but instead things that challenge me or make me nervous and give me butterflies – ie. Singing, taking on a challenging role, or trying something new.

Now, I’ve been with Results May Vary for over 6 months…I think? Anyway, I’ve had plenty of memories and I’m excited to be taking part in this next season of improv as we’ve welcomed in six more members to the troupe! In terms of memories, let’s consult my archive of Results May Vary happenings – the first show I saw, MY first show, my favorite moments, my favorite games, and the memory I think I’ve left.

Storm! I know somebody named Storm. Seriously. AND I really enjoy stormy days – it’s a day for strange chaos outdoors, but indoors it’s the best days to read, nap, or just relax – opposites coming together.

And, I think that’s a wrap with my disjointed thoughts on improv. Anything I’ve forgotten to mention or anything that you’re curious about just come and strike up a conversation. I love to ramble. Happy Monday!