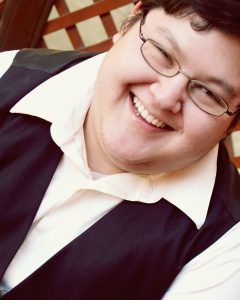 Brelby’s company members comprise our core ensemble. They take on administrative tasks to help keep our theatre running smoothly, but they are so much more than just volunteers. Our company members set the bar as leaders, artists, and humans as to what Brelby’s executive team expects from our collaborative artists. They are dedicated, driven, reliable, creative, and compassionate.

Today’s Company Corner features an interview between Brelby’s Artistic Director Shelby Maticic, and one of our most recent additions to the company, James Beneze. James has been seen on the Brelby stage in Quest for Claus: the Musical, The Pledge, and The 4th Annual Miscast Concert. Some of his behind the scenes credits include Heathers the Musical, Whisper Sweetly and Cold War Kids.

Shelby: I feel like you really clicked with Brelby right away. Tell me about how you found your way to Brelby.

James: One of my best friends, Alexxis Briviesca, had been involved with Brelby for a while and kept encouraging me to audition but I always chickened out. When it was getting time for Alexxis to leave us for NYC, I started to seriously consider finally getting involved. My then boyfriend was extremely supportive and helped push me to talk to Shelby Maticic about volunteering after the fundraiser that Brelby hosted for Alexxis. A few days later Shelby messaged me about needing a costume, hair, and makeup designer for Cold War Kids and I immediately accepted. In the year and a half that I’ve been with Brelby I have been involved in 10 productions, so it’s safe to say that I’ve definitely found a place that feels like home. 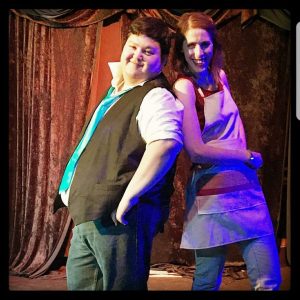 Shelby: I agree…and I’m so glad that Alexxis kept pushing you to get involved with us. What drew you to theatre in the first place? How long have you been involved?

James: My introduction to theatre was in third grade, 1998, when my class put on The Wizard of Oz. It was a small elementary school in a farming community in Northern Illinois, so the sets, costumes, and props were all made by the teacher, her daughter’s, and the third grade students. Except for the principle roles, we all played multiple parts and it was specifically as the Mayor of Munchkin City that I fell in love with performing. Sadly, I didn’t have any other theatrical opportunities until high school, 2004-2007, where theatre was very much neglected and then not again until I enrolled in the theatre program at GCC in the beginning of 2014. And I’ve been pretty much nonstop since.

Shelby: I love this. The Wizard of Oz holds such a special place in my heart. Can you share one or two of your favorite Brelby memories?

James: One of my favorite Brelby moments would have to be opening night of Quest for Claus: The Musical. It was my first time performing in a show outside of a school setting and my first time in a musical. Walking out of the theatre for the gala that night, I was bombarded by so much love and support. It showed me that this is what I really want to do with my life.

Shelby: You were so deliciously evil in that show. I still think about your performance as the Rat King sometimes. If you had to choose one quote that summed up how you try to live your life, what would it be?

James: “Service is the rent that you pay for room on this earth.” – Shirley Chisholm – First black woman elected to Congress in 1968. I’ve loved this quote since my senior year when I found it while doing research for a speech. I’ve always found joy in helping others and this quote just resonated with me and has stuck with me since. (There is a similar quote said by Muhammad Ali in the 70’s) 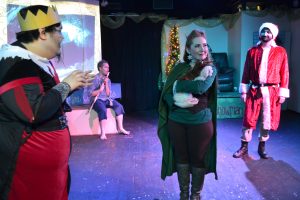 Shelby: That is beautiful, James…and transitions perfectly to my next question. As a company member, you have a specific administrative task that you are responsible for.

Shelby: So our prop designers come to you when they want to pull items for a show, and to find out what is in stock…and you also handle prop donations when they come in. Can you tell me more about what your role entails?

James: As the prop manager one of my main responsibilities is getting all of the prop stock of the theatre organized and catalogued so that eventually I would like to have a library-like check-out system in place. That way we would know what item is being used for which shows and who is responsible for each item being used. If anyone is interested in volunteering, I’m still working on going through the stock and getting rid of old, unneeded items 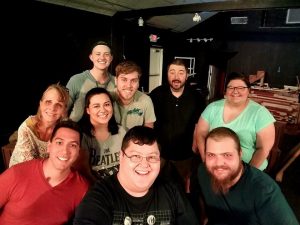 and extra hands would be much appreciated. Then when it comes time to catalogue everything an extra set or two of eyes would be tremendous. I’m hoping to create a tag system where each item has a tag with a reference number, so that will take a lot of work.

Shelby: That sounds amazing…I love organization. And it sounds like if folks were interested in volunteering that they could absolutely lend a hand in this area. You’ve already made a lot of progress for Brelby in the props department. What else are you looking forward to accomplishing as a company member?

James: I’m really looking forward to being able to help bring new works to life here in the Valley. Brelby is so unique in how much faith and support they put into new artists and playwrights and I’m so excited to be a part of it.

Shelby: Thanks for letting us all get to know you a little better, James. Next up, James will be serving as the stage manager for this summer’s production of Spy Love You...a world premiere by local playwright John Perovich.