From writers to stage managers to directors, the ensemble has been hard at work developing the world of The Age of Eibhleann. Now it’s time to bring in the talents of our design team. They have the task of collaborating together to interpret the text and create visuals representations that do justice to the process. Melody Knudson (Costume Designer) and Megan O’Connor (Hair & Makeup Designer) have worked very closely to create their designs.

Clothing is a marker, a message sender, a meaningful form of expression and in the case of this show, a huge component of building these worlds. What has been your approach to helping inform these worlds and characters through their clothing? 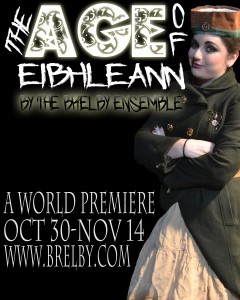 Melody: The Writing Circle chose Gaelic as the unique language for the mythical land of Draiocht and I wanted to build on and support the Gaelic cultural aspect in the script through the costumes. I started researching traditional Gaelic garb for peasants, royalty and warriors. For the characters from Draiocht I chose to use a lot of plaid, Celtic knot details and, for the royalty, traditional medieval bell sleeves which were common for female Celtic royalty.
Another important factor that informed the costume designs was the agreement among our ensemble that we did not need to stick with stereotypical gender norms. I decided that all but two characters in Draiocht would be in tunics or dresses to challenge the Western idea that ‘men wear pants’ and ‘women wear dresses’. Some characters are more overtly masculine or feminine and some are more androgynous. Another way I wanted to use costumes to challenge gender stereotypes was with the costumes for our lead protagonist, Hallie. The idea that kept sticking in my head as I read the script was that I saw Hallie like Buffy. One of the novelties of Buffy the Vampire Slayer was the idea of a ‘girly girl’ being an expert fighter. Mia Passarella, playing Hallie, has years of Kung Fu training and has great stage combat skills and a very strong stage presence so I knew that I wanted to accompany her strength and ferocity with ultra feminine clothing.

Discuss your approach in developing the distinctions between the races of Draiocht through your hair and makeup designs. What inspirations helped you during this process?

Megan: The races within Draiocht are all incredibly different from the kinds of magic they can employ to the way that they walk through this world and interact with each other and help Hallie on her journey. It was important to me from the beginning to make them all appear otherworldly and humanoid in some way, but keep them accessible to Hallie who is not from that realm. Why would she trust someone who looks like a lunatic covered in grease paint?

I was really inspired by the actors themselves because I don’t think makeup is about forcing someone into a character and forcing them to fit, I think it can be, but I’m more interested in what happens when you use hair and makeup to work with the features and personality someone already has to help transform them into that character. Two of my favorite designs are on some of the actors hands. I saw in rehearsal that the Lanmurs were very close to the earth–they crouch when they’re resting. And they’re from a Volcanic-desert location with the ability to manipulate metal so I gave them charred fingers and metal running through their veins. I was looking for a way to give nod to the fact that the Eolas have this intuitive nature and can see the future, and the actors worked on their interactions with each other and they came up with this unique standing pose and way of tilting their heads around, so I decided to tattoo their hands with Celtic symbols. And combined with their costumes, I think those things really helped to bring the world to life as well as help to inform the characters the actors are developing. 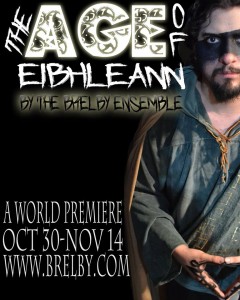 The Taisce is the ultimate magical item in Draiocht. Discuss how each of the pieces fits together and the magical properties that each piece possesses.

Melody: Well… I have not yet built the taisces so I’m not sure how the pieces will fit together yet.  There are five different taisce in Draiocht  that each possess a unique, time-altering power. The first taisce Hallie receives has the ability to pause time. The second taisce, has the ability to transport the owner forwards or backwards in time, relating the the Darras ability to move quickly through time. The third, has the power to freeze someone in time, nodding to the Lanmur ability to manipulate metal and defeat an enemy by freezing them into a metal form. The fourth taisce comes from the snowy mountain peaks, home of the Eolas, and allows the owner to see the separate outcomes given the choices available, giving nod to the Eolas intuitive abilities. The location of the fifth taisce is a secret, but it has the power to steal time from someone’s life. The taisce have individual magical properties and, when brought together, create what we have deemed ‘The Uber Taisce’ which has the ability to magically remove someone from the timeline completely.

Chronos operates in a more realistic world. Discuss how the designs for the people living in Chronos are starkly different to those of Draiocht.

Megan: Chronos is a much more structured place, obsessed with time. And the interesting thing, about the people we meet from Chronos, is that none of them are actually from there so I had to find a way to disguise them but make it believable that they have always lived in that realm. The way I designed for the world of Chronos was to keep it very clean but to, again, pay attention to the actors in those parts and the characters they were trying to portray. Hallie is a student wearing a school uniform while she is in Chronos. Her hair reflects that, but she’s smart and gorgeous (as all girls are) so I glammed her up a bit. Aevus is a watchsmith and a very important person in Chronos, so while he may be kept to the same standards, he by no means has to follow them so I made him a bit more wild. And Grams… well… she’s not one to follow the trends and I’ll just let you see her when you come see the show.

Which character/race has been your favorite to work on?

Megan: I’ve definitely loved the challenge this design process has thrown at me and I love all these characters equally, but if I have to choose, my favorite has been the princesses. Trying to find a way to keep them looking similar and elegant was so interesting and so much fun. I had an idea of how to symbolize royalty in a new realm with the added challenge that the royalty is a combination of many of these new races we’ve created. All I had was this picture, this one piece of inspiration and it transformed those actors into something so otherworldly, and I’m really proud of that.

Discuss the importance of collaboration with Hair and Makeup and how your designs have influenced the other throughout the process.

Melody: We both felt there needed to be a lot of collaboration between our two design areas in order to help ensure an intentional, consistent look. We felt that combining medieval Gaelic garb with edgy, contemporary hair and makeup designs would help establish a look that is distinct to Draiocht. The look that has emerged has an other-worldly, warrior vibe, and we did a lot of chatting back and forth to decide what each race would look like.  For example, I let Megan know I had been looking at images from a show called Vikings for inspiration for the Eolas costumes so Megan found a makeup design that looked like war paint. For the princesses, Megan wanted to use something unconventional to signify royalty and we also thought it was important to outfit them in a similar fashion to indicate that they are sisters. Megan designed matching makeup and headpieces that complimented the color palette I used in their costumes.

Megan: From the start Melody and I were communicating with each other and working to make these characters look like they got up and dressed themselves and did their own hair and makeup to match their outfits. We wanted to make them consistent, but we did want to take some risks, which has been my favorite part of this collaboration. Neither of us have been disparaging about the others designs, but have worked to find ways to make them fit together. Each idea has been met with excitement and new ideas to make them seamless. These two areas interact so heavily, it’s really disappointing when another designer won’t engage. I think we both came into this process with some strong ideas but a willingness to be flexible. I’ve definitely looked to Melody’s designs to help inform what I could do with the hair and makeup and she’s given me lots of great ideas and hopefully everything I’ve done, not only stands out, but helps pull her designs together.

Talk about the challenges and benefits of working on a devised show.
While collaborating with each other has come naturally from the start, it was a daunting task bringing such a large group together to create one cohesive story. The biggest challenge has come from the fact that we all have different personal interests and priorities with regards to storytelling. Shelby’s ability to facilitate the devising process to ensure everyone is included and keeps our storyline cohesive has been amazing to watch. It’s nerve-wracking going into a production when you don’t have the answers and can’t find them on your own. However, this has honestly been one of the most fun theatre experiences that has challenged and stretched us throughout the entire process.

The Quest is underway! As we continue down the path charted by our road map, the Brelby Ensemble encounters a troll that is a staggering ten feet tall with a club and two black mages that can control the elements of fire, water, air, and wind. Costumes/Hair and Makeup. How would you take on these enemies? Choose a weapon from the Directors and a piece of magic to help win this fight!

Melody: Fighting a giant troll and element controlling mages? I would use the magical Swiss Army knife, hoping that it could turn into some kind of ‘earth’ element like a stone sword so the mage’s can’t take it and the Lost and Found Spell in case the mages do something like use crazy intense wind that blows the sword away to a place that I can’t find.

Megan: I’ll reach into the satchel of requirement and hopefully find a can of mace so I can blind the troll. And I’ll definitely need the Caffeine Empowerment Spell because I’m nothing without at least one cup of coffee in me.