Creating an original show can be an adventure. When you start from scratch, the possibilities are endless and little bit overwhelming. Embarking on the quest to devise an original fairy tale was a daunting task, but with my trusty Brelby ensemble by my side…I was ready to lead the expedition.

Entering into this quest, the one thing I knew was who my traveling party would be. The company members of Brelby are our strongest fighters and companions. They know our strengths and weaknesses as a unit, and together we work to learn from every task, every mission, every adventure. (Just look at that photo, we’re a good lookin’ bunch!)

Before leaving on quest, every good adventurer needs a plan…a map. To build our map, our writing team (myself, Megan, Carolyn, Luke, Mat, Devon, Jaren & Cody) took an unconventional approach. We played an RPG game. Sounds a little odd? Well, this game…called microscope, was introduced to me by a classmate at ASU. We used it to devise the concept for a play in one of our classes, and I was sold on the desire to try it with my company. Microscope is a world building tool, perfect for a collaborative playwriting process.

We determined from the start that we wanted to tell a story that centered around a strong female character, Hallie, and we wanted it to be an original fantasy adventure that didn’t draw from existing stereotypical characters from classic fairy tales. After developing the framework for several weeks, we were ready to introduce the story to the rest of our party. We were heavily inspired by language, particularly Latin and Gaelic. 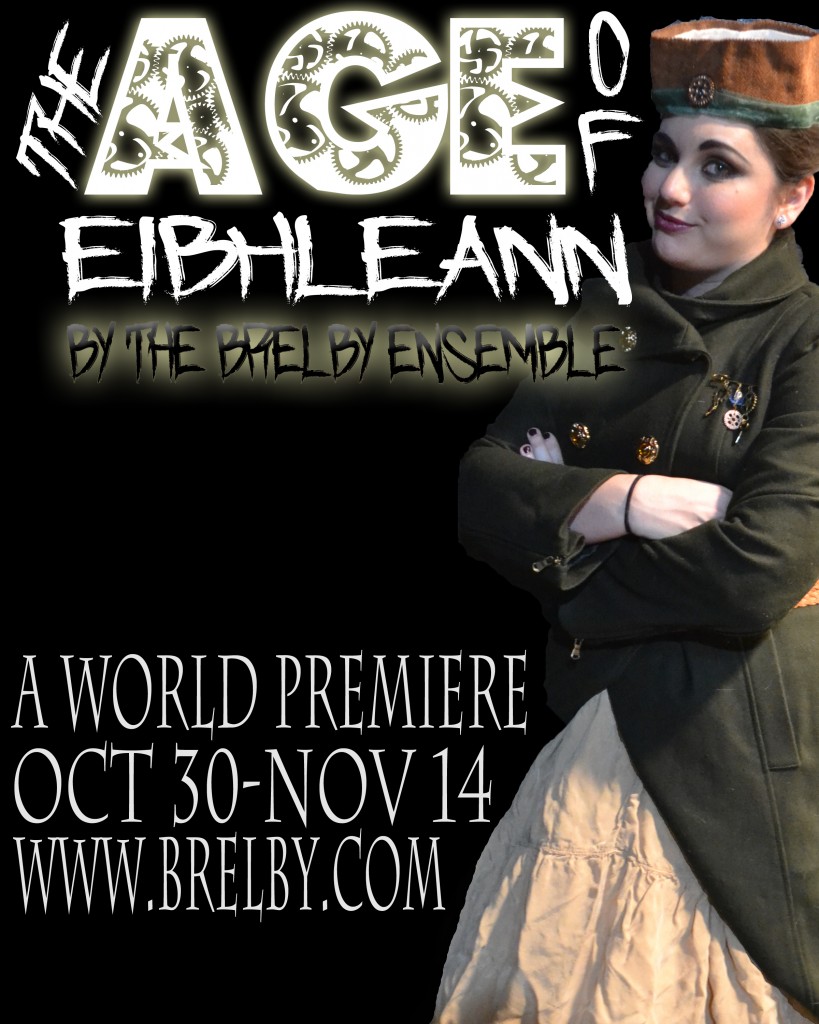 I’m ready to reveal the map key to you, a handy guide to The Age of Eibhleann, that will serve you well as you embark on this quest along with the Brelby ensemble.

Chronos – A realm, strangely reminiscent of our own world. The people of this realm are time obsessed, focused, driven by purpose. Time matters here…it’s valuable. (Check out one of our first promo shots to the right, featuring Hallie in her Chronos Academy uniform.)
Draiocht – (dree-OCT) A magical realm, home to several races of fantastical creatures. This realm is hidden from Chronos, only accessible through especially strong magic. The races of this world are locked in a war, with an ominous prophecy looming over their heads.

The Prophecy – In the Age of Eibhleann, under the purple sky and when the moons align, a leader must emerge to create balance from war. The daughter of Oden will use the taisce to chruscrious the power of Draiocht through blood.
Eibhleann – (ayve-linn) Girl’s name, meaning…radiance for life

Taisce (tash-ka) – Magically crafted items that play a pivotal role in our quest.

Thanks for reading. I hope that you’re as excited about the journey as we are.