Home » The Age of Eibhleann » Discovering Draiocht: Devising and Developing

Devising and Developing in Draiocht

We’ve heard from the writers and the stage management team of The Age of Eibhleann. They discussed the magical worlds, the inventive creatures, and a whole new bag of magic. They also began to prepare the Ensemble for their journey! We have the traveling party, and the creatures known as stage managers to help keep the team on track. Today we introduce the quest leaders…the directing team. They have the task of knowing their party inside and out, understanding their strengths and weaknesses and banding everyone together to make the most of this adventure! We hear from co-directing team (and Brelby founders) Brian and Shelby, as they tell us about the process of guiding the ensemble.

Discuss your approach in developing the mannerisms, backstories, character work, and magic for each race and how that informs the fighting styles of each character.

Brian is the resident fight choreographer and movement specialist, so he played the strongest role in guiding this aspect of the rehearsal process. It was incredibly important to us that our actors were being guided, but allowed to make the discoveries for themselves. Shelby has been with the story since the very beginning of script development, so she has served as a dramaturg of sorts. Asking questions along the way. By the time we began the actual rehearsal process, our original races already had a lot of world building materials to describe them, so our artists used the material to translate into something new onstage.

Discuss how the magic of Draiocht and the characters come into play when blocking the scenes, character interactions, and choreographing the fights.

Magic is a tricky beast onstage. Depending on what route your overall concept is, it can be incredibly complicated (some of our choices for Through the Mist in 2013) or clever and simple (She Kills Monsters, 2014). We’re somewhere in the middle with The Age of Eibhleann. 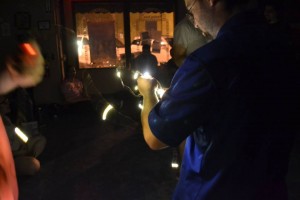 We decided early on that magic had an important role in the world of Draiocht, and that we’d try to accomplish it through a combination of practical effects and media. Our lanmurs are metal manipulators, a la Magneto from Xmen…so we’ve been working with different ways we can use sleight of hand and cleverly placed string to create floating illusions. Our darras are able to shapeshift and teleport. The two actors (David & Devon) who portray our primary darras, Avia, are doing an incredible job with physicality and creating quick and simple optical illusions with their puppets. We’re also going to be busting out some of our traditional elements…pressure cannons, specialty lighting. Creating magic is a ton of fun.

Talk about the challenges and benefits of adding magic to a staged production.

Any time that you decide to rely on technical elements to deliver a desired effect it’s a challenge. It requires precision of movement and timing, patience, and a clear vision. It’s also incredibly fun and impactful when it lands just right. We’re risk takers at Brelby by nature, so we’re ready to try some new and fascinating effects.

What was your favorite race/realm and magic to explore during rehearsal?

Brian: I think its split between the Darras…because puppets, and the Eolas. The intuition and being calculating about every movement and detail was challenging and interesting.

Shelby: I like them all! It’s been so fun to watch David & Devon bring Avia to life…she’s such a sassy little Darras. The Eolas developed into this really fascinating race that fits really well, but is so different than what we originally brainstormed. I love the lanmurs too. They’re these gruff teddy bears who are fiercely loyal and incredibly grounded.

Talk about the challenges and benefits of working on a devised show. 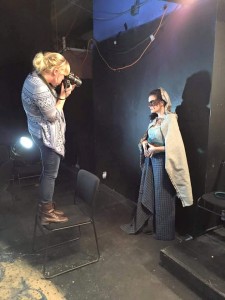 Brian: It’s interesting. It’s a whole different process when everyone is collaborating. There are significantly more compromises that have to be made, and it forces each artist to really justify their choices if they want them to be included.

Shelby: It’s challenging to make sure that every voice is heard equally. I’ve tried really hard to be a facilitator throughout the process and to balance the contributions of the artists with what I think is the right choice as an Artistic Director. The amazing thing is that when things click…they really click. And we all have this joint investment in the finished product. Last night’s rehearsal was the first time working with a new ending to the show, and there were just these moments of clarity that made several of us sigh with contentment. I love that we all get to share in the discovery and creation process.

Shelby wrote about the Microscope Session and framing it to represent a treasure map or a map of Draiocht. As an Ensemble of Brelby, we are preparing to go on an epic quest. Our directors have been tasked with choosing the types of weapons our party will need to bring on the journey. Choose wisely.

Shelby: I’m going to choose to make our swiss army knife into a magical one. You can will it to open up with any sort of piece you need, and it’ll all fit compactly back in your pocket. Sword? Knife? Bow and Arrow? Right there…and customizable to your favorite color.

Brian: A satchel of requirement. Kind of like the room from harry potter, but you know…. mobile. You reach in and grab whatever you need to get the job done.