Home » Ghost » In the Director’s Chair: Ghost the Musical 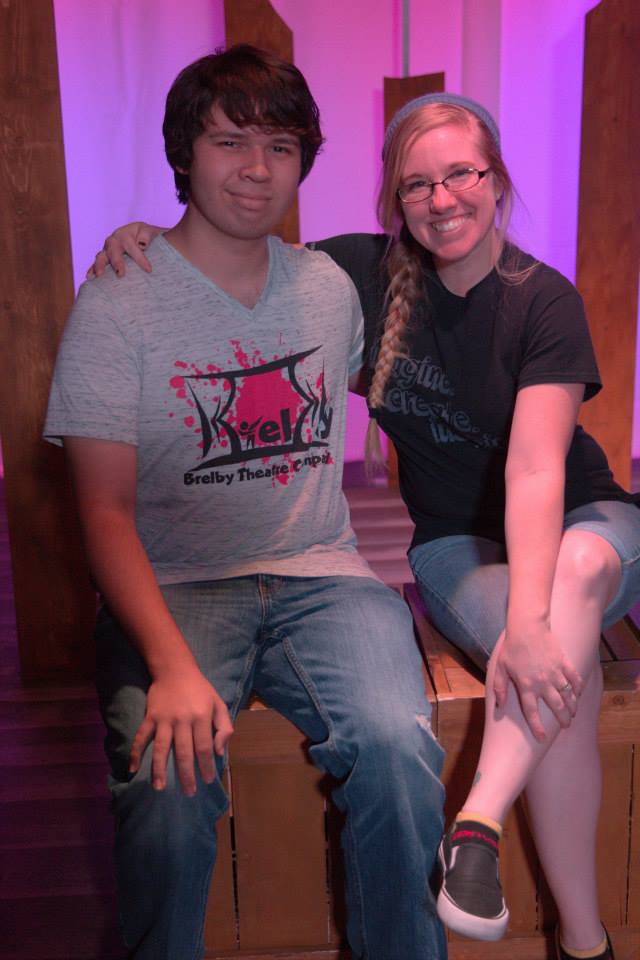 SHELBY: What made you want to apply to assistant direct for Ghost?
ZACHARY: I love working on musicals and Ghost is actually one of my favorite films so once this show was announced I jumped at the opportunity.
S: How do you view your role as the assistant director on a show of this scale?
Z: I definitely believe I’m helping keep the director sane. There is so much to this show and so many cast members that it is nice to be there as a helping hand for character development and blocking and everything so we can stick to the schedule and do multiple things at once.
S: I’d agree with that! We’re about a month out of opening. What has been your favorite part of the process so far?
Z: Seeing so many new and passionate artists already love this production. We have a lot of Brelby debuts in this show which is always exciting. Everyone is so freaking talented!
S: We do. Lots of new talent. Have you had any “wow” moments during rehearsals? Or…moments where you could really visualize what the show is becoming?
Z: Yesterday when Taylor performed ‘With You’ for the first time I started tearing up so I’m totally going to bawl my eyes out by opening night. And seeing everyone on stage during ‘More’ just made me just sit back and think, wow, this show is just going to be so amazing.
S: Right? It’s such an emotional piece. This isn’t our first time working in this partnership. What do you feel you learned from Little Women that you’re going to be able to bring into this piece?
Z: I feel much more confident coming into this production. Little Women… I was thrilled for but was more introverted when working on that piece. This show I’m ready for everything that comes my way.
S: I can definitely see the difference. You were great during Little Women, but there’s a different air of confidence. What are you looking forward to the most about the rest of the process
Z: Seeing the character development expand for everyone.
S: So being on the production team means a lot of production meetings too. What are you excited about so far from the design team?
Z: Jessie Tully’s costumes sound amazing so far! I’m excited to see the final outcome and how they will look on stage.
S: Yes, and she and Allison, our hair and makeup designer, are working really well together. I think their design styles compliment one another very well. Clayton, our sound designer, is doing these incredible things…building his own sound cues from scratch. I’m excited about everyone on the team, we’re really creating something beautiful together. You’re not just a director…you often perform for us. How do you feel that being an actor helps you as a director?
Z: Being an actor allows me to understand what is needed on stage for a successful show. When blocking I know what to be aware of, what will work and what won’t.
S: Favorite song in the show?
Z: Currently ‘Here Right Now.’ But ‘Outta Here’ is definitely a runner up.
S: I love both of those…but right now I’m a big sucker for ‘Gotta Let Go Now.’ Melody is so suited for that jazzy style, and the ensemble sounds…ah-may-zing. It’s hard to choose favorites. What do you think is the most challenging part of directing?
Z: Always trying to have the stamina. Being a director you are constantly doing something so remaining fully present and energized can be difficult sometimes.
S: Tell me about it. It’s part of why Megan and Devon make such a good stage management team for us. They can see when my brain is fried and I need to breathe. What do you hope audiences take away from this show?
Z: I want audience members to be so heartbroken that they tell everyone person in their life how much they love them every person.
S: Goals! This show is special for a few reasons…but it’s our first production in our brand new space. You’ve been with us for a while now. What does it mean to you to be a part of the first show in our own home?
Z: Being a part of the first show in the Playhouse is such an honor. We’re setting the tone for what audiences can expect in the new venue and I get super excited just thinking about it. And it will be fun to say, oh yeah I was a part of that, I helped set the bar.
S: It’s also the 50th production that we’re going to be bringing to life…that seems so insane.
Z: How is that feeling for you?
S: Exciting. Exhausting. Haha. 50 shows! How did we even do that? Alright, I’m going to be selfish here. You seem to like working with me as a director. Why do you think we click as a team so well?
Z: I love working beside you! It’s another reason I wanted to assistant direct this show. I feel like we have similar thoughts and think on the same wave link. Our directing styles are very much alike and we’re constantly bouncing ideas on each other. Little Women showcased that with “hey what do you think of about? I JUST HAD THE SAME THOUGHT”
S: Haha, totally. You’re the Wallace to my Veronica.
Z: Marshmallows forever!
S: Okay, so last question. I always make the Brelby folks do this. Sum up theatre for yourself in one word.
Z: Passion.