Tell Me About Yourself 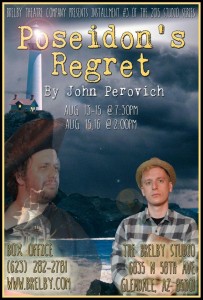 The next installment in the 2015 Studio Series is Poseidon’s Regret, a swashbuckling adventure with lots of heart. Written by John Perovich, one of Brelby’s instructors and favorite playwrights, John sits down with himself (yes, you read correctly) and gives us a glimpse into his process of writing this show, his relationship with director and company member, Carolyn McBurney, and why you should support local art.

John: What inspired you to write Poseidon’s Regret?
John: The play began as a writing exercise. I attended a playwright workshop lead by Brian Maticic, Managing Director of Brelby Theatre Company, in the spring of 2014. I don’t remember the writing prompt exactly, but I think Brian asked me to write a few pages that had a major surprise or a considerable reveal. At the risk of sharing a fun spoiler, I won’t go into it—come see the show! From that exercise, the play began to develop. In addition to the exercise, I always had an image of a woman—a stranger—running into a cabin in the woods. Was she a ghost? Who was she? I didn’t know—I’ve tried to answer that question in this play.

John: Do you think this play would exist without the writing prompt from Brian at Brelby?
John: Probably not. Playwriting is strange. Where do ideas come from? Do they live inside me for a long time waiting to surface? Do they appear all of the sudden? Where do they come from? There isn’t one answer, of course, but sometimes a writing exercise or something someone says—a conversation—will lead me down the rabbit hole. I keep asking myself, what does that detail mean? Where did it come from? How does it fit into the story? Who are the characters? It goes on and on like that for sometime. I write to understand the story.

John: Can you talk a little bit about your writing process for Poseidon’s Regret?
John: As a MFA Dramatic Writing student at Arizona State University, I was fortunate to be able to develop the play as a part of my program’s dramatic writer’s workshop. During the fall of 2014, I periodically brought new drafts of the play to class and received feedback from my instructor, Professor Guillermo Reyes, and my peers. In the spring of 2015, Poseidon’s Regret had a reading at Brelby and I received more feedback. From that reading, more rewrites occurred. All other rewrites took place once the show was cast. I’ve actually made a few changes since rehearsals began.

John: Has the play changed considerably since the first draft?
John: Absolutely. The first draft is always a mystery. I could probably outline my plays better before writing (something I’m doing more and more). The most significant changes occurred after I met the cast.

John: Did the actors inspire you to make changes?
John: The cast met two weeks before rehearsals began to read the play aloud. There was something about that reading that prompted me to work out several issues I was still having with the play. The inspiration came from a few places: meeting the cast, pressure that rehearsals were right around the corner, and great questions from the actors, designers, and the director.

John: Do you consider playwriting a collaborative art?
John: That’s a great question! Absolutely! I think many people have this idea of the lonely writer sitting at a blank screen waiting for inspiration to strike. Perhaps that image is true (some of the time), but I thrive in collaborative settings. Of course there were days with Poseidon’s Regret that included quiet writing sessions and lots of coffee, but I was in constant conversation with others while writing. I’ve kept in touch with Brian and Shelby, constantly submitting new drafts to them along the way. I also have a great support system at ASU. This is also the first time I’m working with a composer! Kierstyn Greenberg is writing original music for the play—we have been meeting to discuss various drafts since last fall. Out of everyone that has been a part of this process, the greatest collaborator for Poseidon’s Regret has been my director, Carolyn McBurney.

John: Can you talk more about that collaboration?
John: Where to begin? Since Carolyn and I were paired together, she has been the strongest advocate for the development of the play. It is hard to recall when Carolyn and I first met about Poseidon’s Regret—it seems like she was there since the beginning. I remember meeting together to discuss a very early draft. Carolyn asked insightful, specific, and helpful questions—she also made observations about moments that she enjoyed in the play…she also mentioned areas of the play that were confusing (at that point, there were many). As a playwright working on early drafts, you want a collaborator who is both nurturing and critical—after all, the goal is to consistently strengthen the play. Many of Carolyn’s questions from that initial meeting shaped the development of the play—including design elements and character motivations.

John: That sounds like a successful artistic partnership. Changing gears a bit, what do you want audiences to walk away with after seeing the play?
John: I would love for audiences to walk away feeling thankful for the important people in their lives. Eli, the play’s protagonist, begins an unexpected journey from anxious uncertainty toward understanding and kindness. Hopefully, audiences will be able to relate to Eli as he works to overcome several, significant challenges. I also hope the audience has fun! The play is a contemporary fairy tale, caught somewhere between everyday life and a sea shanty. The world of the play is ridiculous, unexpected, and entertaining. All of the actors are doing wonderful work—the play is really coming together.

John: Is there anything else you would like us to know?
John: Brelby Theatre Company is a wonderful place for new work in the valley. Not many theatres work directly with playwrights AND produce the writer’s work. As a playwright, I have been fully supported throughout the entire development process of this play. I am partial to this theatre, of course. I have been coming to Brelby since moving to Arizona (going on 3 years). I also teach playwriting as a part of Brelby’s production intensive class, which brings actors, directors, and playwrights together for the development of new plays.