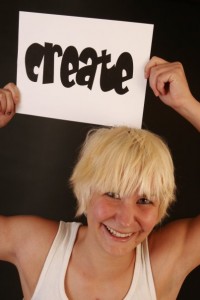 I wrote a few different things for this blog, because I wasn’t sure what I should start with to get where I wanted to go. Those that know me, know that this is not unusual, and is very much the reason why I have never been able to finish writing a play or a book or, hell, even a short story for that matter. When I have a deadline, I wait until the last minute to spew out whatever comes to my mind, and hope that it turns out halfway decent. I am not doing that for this blog, though, because Brelby deserves much more respect than that.

I thought that I would first share some anecdotes about our time in college together. Perhaps it would be the story of how I turned the lights off on Charlie Brown in the middle of his solo while Shelby’s entire family was in the audience. And then maybe I would add some joke about how Brian always seems to cast me in the role of characters who are abused by their significant other. But I realized that, though these stories may be amusing and possibly get a chuckle out of the reader, they do not begin to even touch on what Brelby is.

To understand the success of Brelby, we must first look at its origin, because, no matter what Brian and Shelby say for the matter, the real reason that Brelby has been successful is because of the type of people that they are. They are not just directors and actors, but also teachers. They are people who are willing to take risks and push their comrades to discover their full potential. 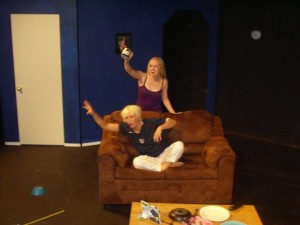 I have only ever worked for Brelby on one show. It was their first season and we didn’t have a home or even a rehearsal space. If I remember correctly I was called in with less than 2 weeks before our first performance to take over one of the lead roles in Playing Games. We rehearsed in the middle of the night because almost everybody in the cast had a full-time job. We practiced in parking lots and living rooms because we had no space to call our own(I remember one night in particular I had to pee just outside the sky dome because there were no other options). I rehearsed lines on my lunch break and in the afternoon when I had finished with my 6am shift, hoping that I would have the play fully memorized before our first performance (*spoiler* I didn’t). I got about 4 hours of sleep every night for the entire run of the show. I drove hundreds of miles on back to back days just to make it to a performance and back home to work on time. I even managed to turn my hair grey in an attempt to get it a natural shade of blonde to make Shelby and I look more like sisters. I put on the absolute worst performances of my entire career, and it was totally worth it.

I’ll note at this point, that one of our performances was to an audience of 4, all of whom were relatives of those in the company. No, you didn’t misread that. We had 4 people in our audience and we did what every good actor does, we went on with the show. 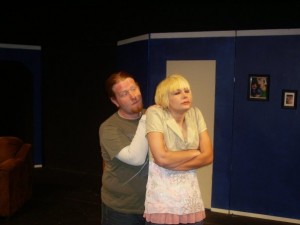 Many people would have looked at this experience and become discouraged. They would’ve counted it as a failure and possibly given up entirely. But that is not the type of people who Brian and Shelby are. They are the people who keep teaching, and encouraging, and pushing those around them to be better with each passing performance.

Yes, they are pushers, and they are relentless.

They are also risk takers, and not just for starting a theatre company from the ground up; they take risks on people. Faces they have never seen before are just as likely to be cast as Luke Gomez, who has been with the company almost since its inception.  Those that have been with them before, they will take out of their comfort zone and have them perform in roles of which they never even dreamed possible.

As a freshman, I had never been cast in the department, but Brian came along and threw me into the part of an abused ingenue, which was far from the character roles that I was used to playing.

When that unfortunate blackout happened, Shelby didn’t pull me into the green room to chew me out in front of the cast and crew as many directors are wont to do, but rather forgave me for the incident. Even after that, she said yes to working with me again.

They understand that, though there is a necessity to be stern and keep your actors in order, that it can also take a soft hand to lead them where they need to go. They know that encouragement is far more effective than insults and yelling. And above all, they never give up on themselves or anybody around them.

When the opportunity was presented for me to become a part of Brelby’s company, I didn’t accept it for the role that was offered or the opportunity to perform with a troupe that would be seen all over the state. There was no money involved, no fame and fortune that every actor secretly hopes for. I knew it would be difficult and that I could potentially lose my job because of the decision to join. I knew it would mean long days, and sleepless nights, and an empty stomach as I chose to pay for gas instead of food to make it where I needed to go. I did it for no other reason than the fact that Brian and Shelby are the type of people that you support and take risks for, because they would do the same for you. If you ask the two of them, they will tell you that they wouldn’t be where they are today without people like me, who were willing to help them and work with them when they were just a possibility, an idea waiting to develop and grow. But it really comes back to Brian and Shelby in the end. They are the reason for their own success.

As for me, I occasionally do the acting thing. I passed on several opportunities to attend performing arts schools, including one in Scotland, because I am absolutely in love with my little mountain town. I sometimes hear from those who have moved on to bigger endeavors asking why I haven’t given LA and New York a try, but I don’t know if I could handle acting as a job and not just a passion. I am first and foremost a mother, so I don’t make it onto the stage as often as I would like, but I will always turn up if its Shakespeare. I have expanded my repetoir to include everything from Puck to Liza Moriarty, and my butt has appeared on stage more times than I ever thought that it would. I keep pushing myself to do bigger and better things, just as I was taught to do that summer 5 years ago.

More than anything, I don’t give up. As Brelby has proved time and time again, as long as you believe in yourself, there will always be others by your side, believing right along with you.