How’s it going, my name is David Magadan and I am a Brelby company member, Improv instructor, and one of our resident smart mouths. I have been with Brelby for about a year now and it has been eventful to say the least. My Brelby story begins where a sad story ends. In brief I was betrayed by people who I thought would love me, support me, and with whom I could do no wrong. This was not the case and for the very first time in my life I was defeated. I believed art and artists alike to be a selfish medium that I no longer loved. I had hit rock bottom.

I auditioned for Brelby because a friend of mine, Steven Cleavland, was having some of his one acts produced there and his lovely wife was going to stage manage. I auditioned and was cast in both one acts…predominantly as a dead body. To be honest I didn’t really appreciate the opportunity at the time because it only seemed to solidify my choice to quit theater. After the show closed I noticed that they were doing Love’s Labour’s Lost and I jumped at the chance to do another Shakespeare because of my love for the Bard. Ironically I had another audition that day and I was praying that I would book that job because it seemed like a better opportunity. I’m not much of a religious man but God clearly knew what was best for me. I was cast in Love’s as the clown Costard. This, ladies and gentlemen, was when I became hooked and got back into the game stronger than ever. Since then I have lit a musical, sound designed for three Brelby shows and then taken that knowledge to do work for other places, performed in seven productions, helped found Brelby’s Improv team Results May Vary, and have moved into the Brelby house. I had lost my passion when I came to Brelby, what I found was the most powerful force of all: Ambition. 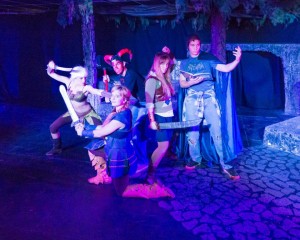 Ambition is a strong desire to achieve something, something that you love that is powered by love.
I have tried to find the appropriate words for why I have thrown my lot in with this scrappy little theater and it was not until I was able to give a speech to my fellow cast members before the closing performance of She Kills Monsters that I found those words. It is because Brelby is a place of thinkers, achievers, doers, and fighters. Time and time again they attack whatever challenge comes their way and always come out on top and stronger than ever. When I think back to that closing night I am filled with pride, just I as I promised them I would be, and I feel the same way when I think of my year here.
So, to commemorate my year at Brelby I will share with you what I have learned: You are playing make believe so don’t take yourself too seriously, true art is selfless and giving, drinking liquid during an improv class lands you a date with the mop and a very angry stage manager, the people you like least can be the people you admire the most if you get to know them, nothing can defeat a group of people who love each other and what they do, and no matter what you do in life always play with reckless ambition.