Disclaimer: I’m an expert blogger…the world and myself just don’t know it yet. 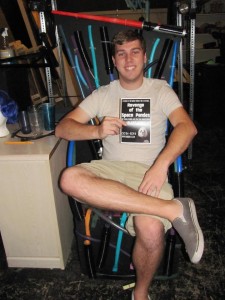 My name is Devon Mahon, and I’m basically a newborn at Brelby. Like Brian and Shelby (Brelby) I too hail from Northern Arizona University, where I received my true bearings in theatre. And though I’ve heard the faculty talk about them, it wasn’t until August 30th that I actually found my way to their location and watched my first ever production of Little Shop of Horrors thanks to a post I saw by Nico de Garriz. Now this…this is where my story begins and the avalanche takes place:

Sept. 7th – I arrive back at Brelby Theatre eager to strike the set, and when I say, “strike the set” I actually hope and pray that I’m assigned something that does NOT require the use of power tools. Several futile attempts at opening a front door eventually lead to my being greeted by Brian and Jesse (later we are accompanied by Clayton). Long story short…”Oh, you’ve never used power tools? Here’s a drill, here’s how it works, learning experience!  Never been an ASM? Learning experience! You’ve got the job.” 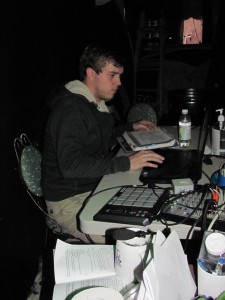 Sept. 13th – Attend a company type event with team building and committees to further immerse myself in Brelby.
Remainder of Sept-Now (speeding up the process and commencing heavy snow fall) – Sit in at Callbacks, watch The Princess and the Pirate, attend production meetings and rehearsals for Revenge of the Space Pandas, make friends, tag team hair and makeup with Melody, continue to make friends, rid of a giant plant, tech week, spend entire days at the theatre, help build props, help sew, help hang lights, shows begin, apply for next year, Gala (aka I fell off a chair), get a teaser sample of getting to act for Brelby with promo, more shows, etc…I’m hooked.

I could go into hours of detail talking about how I got more and more comfortable at Brelby or how each of my relationships with cast and crew began to bud, because each one happened at a different time, in a different way, and has its own distinct (Ha! You thought I would say “different”) style of friendship or humor or what have you. What I can simply tell you however is that I originally planned to leave a couple days after the final performance of Space Pandas. The plan was to move to Seattle, because there was nothing left for me to do in Arizona. My good friends were all gone, the job search wasn’t going well, and I was going to achieve my dream of living in an apartment in a city where I could walk to work and pursue theatre at the same time. I was wrong. I’m not quite done with Arizona just yet. 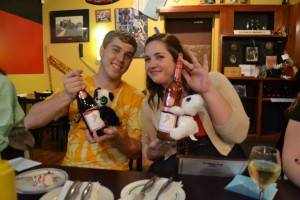 Here at Brelby I’ve found a true happiness. I’ve joined a family, and you all can guarantee that I’ll be around next year. I’ve already applied for some positions, and I’m beyond excited to audition for shows. Brelby Theatre isn’t getting rid of me until I’ve performed on that stage. Brian and Shelby are two of the most genuine people I know, and this space they’ve created is truly a special one. For me it’s been a place of growth in both new experiences like ASM’ing or using power tools and in finding a home that had felt lost since graduating college.

So my tagline for finding Brelby?

Thanks to a giant, man-eating plant I’ve found myself in the Pearl of the Goose Nebula hoping to become a “Fool” by next year.