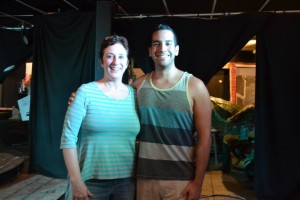 “Because Shelby was crazy enough to give me a role.”

These words have echoed throughout my head ever since I first walked through the door of Brelby to see my first production there, Oh, the Humanity! Now, before I continue any further, allow me to introduce myself by painting you a picture. There I am, sitting on a stool, the smoke of a cigar slowly billowing from the front end. The red glow of the embers is the only light source as the shadows ever so slightly play across the face that is serious with eyes that are looking out into the distance longingly. Maybe this situation is not the best as everyone would be tripping in the dark, bumping into each other. Also, the smoke from the cigar would probably bother a lot of you as it can be a bit annoying. And I mean really, me just sitting there on a stool?

That’s just boring and….what just happened? Oh, hey there! So yeah, that was a glimpse into what I consider funny and how I tend to interact with people. This is why when I speak most people look at me with the same facial expression of “What the heck is he talking about?” 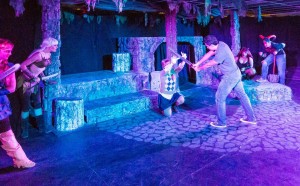 Allow me to start again, my name is Fernando Perez and many of you know me from playing Miles in She Kills Monsters. That was my first show with Brelby, although I had worked with the elby of Brelby a few months before at ASU. This show about D&D would end up being a gateway to finding what I honestly never thought I could find. The words family and home have all been put forward and while those are beyond true, I have found something more with this group of actors and all around friends. Anyone who has known me for a little bit will describe the character of me as harsh, quick to judgment, opinionated, likes to speak his mind, tells jokes that result in more groaning than laughing and hates everything. When it comes to the positives, I’ve been called hard working, confident and truthful. What’s funny is, for the very, very few who know me well, this “Fernando” that is seen in public is almost completely different than the one behind closed doors. Private Fernando is lost, beyond afraid of failure, looks at the glass as shattered to pieces instead of half full, am riddled with insecurities that reach the point of crippling and there is not one day that I don’t remember my father who passed away in 2006 and miss him. Now, this does not mean that public Fernando is completely a false mask I put on as a lot of the descriptions are how I actually am, but we all have characters we play out in the real world. 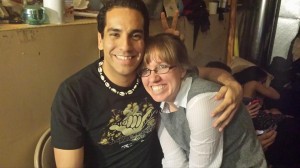 Why would I open up like this for every one to see? That question is easily answered by one word, Brelby. Brelby is a home, a family, a loving group of friends, but also much more. It made me no longer afraid of who I am and has given me a sense of belonging that I have looked for my entire life. From religion to college, I have tried to find a place that I know I belong and I have finally found it only five minutes from where I live. Everywhere I’ve ever been, I have felt one step behind, a square peg in the triangle hole, the last kid picked for the kickball team even though they all knew I could kick it further than anyone else and had better speed than half of them….sorry getting off track again. The point is, many people spend their entire lives finding that special place that speaks to them and I found mine right there at Brelby, “Because Shelby was crazy enough to give me a role.”