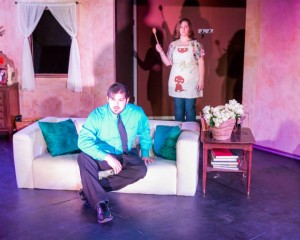 Where to start my Brelby story? To start at the true beginning is over a decade  of stories ranging from “Mike Tyson’s Punch Out” to moving in with the Maticics themselves. Stories of friendships formed, almost lost, and reformed to something even stronger. I suppose the best place to start is a wedding.

I had the great pleasure of being invited to Brian and Shelby’s wedding. Brian and I had been friends since high school but life had forced some distance over the past few years. This is the event the brought that to a close. Drinks were had and conversations were made as if no time had past. I already felt more at home. I was aware of Brelby before this point but wasn’t involved yet. After the wedding I made it point to come out and support them as often as I could and in September of 2011 Brian gave me a call and asked if I’d be interested in taking on a role in their upcoming production of Alice’s canvas: The Wonderland Exhibition. From there, well, I had the Brelby Bug and since that point there is hardly a show I haven’t been  involved in in some shape or form. Leading to the highlight of my time here, Be a Good Little Widow. 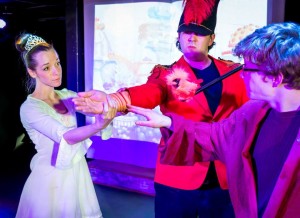 Brelby is a company where it’s impossible to feel uncomfortable or afraid to try new things. In fact they make a point to push you to exceed your previous limits and learn new skills. Widow was the show where I was pushed the hardest to come out of my comfort zone and is without contest my favorite role and best performance I’ve ever given. The whole experience was wonderful from start to finish and that’s just what Brelby does. They create a family and push each other to achieve greatness, focusing on who you are and strengths. With Brelby I’ve found a home both figuratively and literally and I don’t regret a minute of it. There have been ups and downs for everyone in Brelby but through it all we know we have each other and I for one am here for as long as they’ll put up with me

It’s hard to sum up my experiences into a single post. So much love and dedication and no adequate words to describe what Brelby really means to me. All I can say is read every blog this month and you’ll see that we have something very special. We’re always open to new friends. Joins us and help us create new and exciting art in the valley. You’ll never regret it.