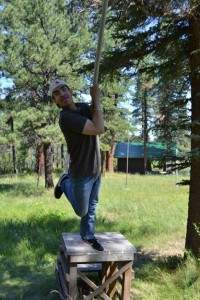 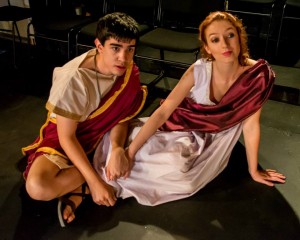 A year ago in the summer I was still recovering from depression. I was visiting my parents from Tucson when I happened to notice that there were auditions for A Midsummer Night’s Dream at Brelby that same weekend. I was down on myself, but I remember thinking, “I have nothing to lose.”

I remember it specifically being a beautiful Saturday morning and getting up early for my audition. I was super nervous, especially because it was going to be my first time auditioning for community theatre. I remember parking outside of Brelby, looking at their front door, and feeling extremely intimidated. I was in a negative state of mind, so the last thing I needed was another place where I felt like I didn’t belong. As soon as I walked in though, my worries were gone. Brian and Shelby had created such a relaxed and inviting atmosphere that I wasn’t afraid of being myself. Long story short, I did my audition, and went home. A few weeks later, I received an email saying that I had been cast as Lysander. I was ecstatic! I was going around my room yelling, “WOOOO!!!” Little did I know that it was the beginning of my road to recovery.

Midsummer was a fun and rewarding experience, but more importantly, it helped me gain confidence. I was 20 years old going through a mid-life crisis. I wasn’t comfortable in my own skin, but Brelby taught me that I was enough. I know that in the theatre world, you hear that all the time! “Be yourself,” “you’re enough,” “we like you for you,” but this was the first time I had experienced that without anyone verbally telling me. I felt like I had finally found a group of people that accepted me for me. That new boost of confidence didn’t just help me out in theatre, but in life as well. I began doing things I had never done because I was finally sure of myself. I was finally experiencing life for what it was and it was due to Brelby.

I had the best year of my life because of Brelby. I am not saying that post-summer 2014 hasn’t been great or that I haven’t had great years before 2013, but I can’t remember a time where I was so genuinely happy all the time. It’s only fitting that my great year started and ended with the scrappiest theatre I know! This past summer I got to be a part of She Kills Monsters, which is easily one of the funnest (just created a word) experiences I’ve ever had. I got to meet new friends, become closer to other ones, while adding another credit to my resume. You seriously could not ask for something better. I’ve been around a few theatres these past couple of years and Brelby is the only place I’ve been to where it’s not a bunch of strangers thrown together, but a family working as a cohesive unit.