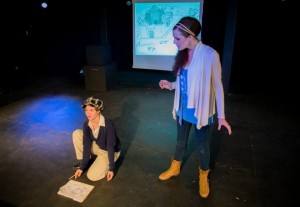 There are so many things that I could say about Brelby but as these blogs are titled “My Brelby Story”, I will share just that.

Two years ago I found myself unable to recognize the person I was.  I had largely lost sight of myself and felt as though I had completely lost my identity; nothing in my life resembled my dreams or passions or ‘Melodyness’.  I felt like I was simply existing; no purpose, no direction, no identity.  My nickname has always been Melly Sunshine but I was very certain at that point that my sunshine was gone.  I didn’t know where to start but I knew that something had to change.  Taking a look at my life from the outside in, I concluded that while I was unsure of everything else around me, the one thing I was sure of was that I loved theatre; maybe I could find a remnant of myself on stage.  And so my quest to rediscover myself, to recapture my sunshine, began.

I was twenty five at the time and had not done a full play since I was eighteen.  I didn’t have a resume or a headshot and I had absolutely no idea how to audition but nonetheless, I started showing up for auditions with a mixture of vigor and apprehension.  My third audition resulted in a casting offer and I suddenly found myself plunged into the world of community theatre. As I suspected, the rehearsal and production process proved to be enlightening; a part of me, however small, was brought back to life and I knew I was at least going in the right direction in my quest.  What I didn’t know was that first show, my entrance back into theatre after an eight year hiatus, would put my quest into overdrive. I had been trying to put my foot in the waters of change and ended up jumping off a cliff; in the famous words of Will Smith “my life got flipped, turned upside down”. 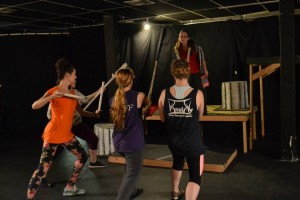 With the realization that theatre was not just a hobby but a part of me, I was challenged to make more changes, drastic changes, to start taking back ownership of my life.  This process was scary as hell, the anxiety and depression I had been in the middle of worsened, but I continued pursuing theatre as it seemed to be the one thing I could be sure of.

Introduce Brelby. I saw an audition notice online for A Midsummer Night’s Dream.  I scheduled an audition and ended up having a blast.  I had grown accustomed to auditions being competitive and uptight-professional but this was a unique experience; I was greeted by smiling faces and one girl, hearing that my name was Melody said “My name is Melody too!”.  She was sweet and sparkly and encouraging and made me feel welcome and unafraid.  We played games during the audition and Brian and Shelby kept asking me to make bigger choices;  I felt completely stupid but went with it anyway.  I was not cast in Mid Summer, but something about that experience made me want to go back.  I attended auditions for a studio show and was cast as the Narrator in a lovely little production of Telemachus, Darling.  In this little group of seven, along with our crew, I felt at home.

It was almost a year later before I was able to return to Brelby where I was cast as Kaliope in She Kills Monsters.  In that year, my theatre pursuits had been going swimmingly, but the rest of life had completely crumbled.  In that year I had started to recover my identity but the crippling sadness lingered.  I felt like I had a better grasp of who I was but I just could not kick the overwhelming depression.  The production of She Kills Monsters, however, was a game changer.  I found myself surrounded by a group of people who genuinely cared about each other and also had a ferocious passion for theatre.  I decided to test the waters, sharing bits of my story and found that I was met with compassion and respect instead of judgment.  I found myself surrounded by a group of people who could see the sunshine in me that I was no longer able to see.  I was embraced as a person and challenged as an artist.  I suddenly had a whole new group of friends who didn’t expect perfection, just honesty.  This was a place where I could show up as Melody, in my flower pants with my big pink bow in my hair, dancing around like a ballerina…and be loved instead of laughed at.  This was a place where I could be unafraid.  Unafraid to let my true self out, goofy and awkward and ridiculously enthusiastic, instead of trying to fit into some socially constructed box that I didn’t fit in at all. 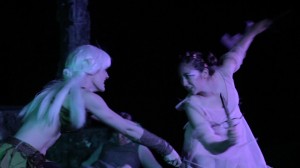 Through my experiences at Brelby this year, She Kills Monsters, the Leadership Retreat, The Princess and The Pirate, the Miscast Concert, I have found a place where I am good enough just as Melody.  There is a tremendous freedom in that!  It ‘s as if I have been given permission to be authentically me and a beautiful thing began to happen; I started laughing again, I became passionate again, I started to want to invest in other people again.  I had found my sunshine again.  For the first time in a long, long time I recognize the person I am.  My heart is full of joy again and I have recaptured a sense of hopefulness.  These recent months at Brelby have been a time of tremendous restoration.

Brian and Shelby have created a community that is a force to be reckoned with.  At Brelby there is not an expectation of perfection but an expectation of authenticity.  Not perfection but a willingness to try and to take risks and to grow.  At Brelby, artists are not expected to be perfect but they are expected to conduct themselves with integrity and to support their fellow artists.  Brelby is more than a theatre company putting on plays; it is a community that fosters growth in each artists craft and their confidence and a place where individuals are challenged to be leaders in the art community and in all aspects of their lives.

I’m terrible at condensing all my ‘feels’ and this is long already so I will end with this:  I am inexplicably grateful to the Brelby community for helping me rediscover my sunshine and my zeal for life.  I have grown immensely as an actress and have found myself again.