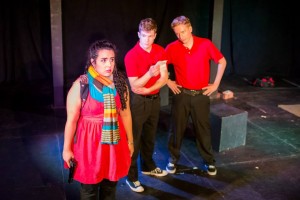 Hello everyone! My name is Tati coming at you from Boston, MA as I am now attending Boston University’s acting program as of September of this fall. I MISS BRELBY SO MUCH!! Brelby is pretty much synonymous with the world family, and let me tell you that during this past year and some change before going away to school once again, the Brelby community truly became my second home. 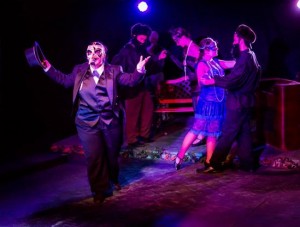 I first auditioned for Brelby June of 2013 and was cast in A Midsummer Night’s Dream as Snug the Joiner. This was my first ever Shakespeare role and I will go ahead and say that I pretty much killed it as the Lion in the Mechanicals’ play. Once you audition at Brelby, you kind of get hooked because the atmosphere in that homey black box is incredibly safe, inviting, and a creative space for exploration and growth. That being said, I continued on to perform in productions such as Through the Mist and The Kill, and Love Labour’s Lost. These two productions in particular really enabled me to explore character work, build confidence in myself as powerful and physical performer, and gave my the opportunity to practice character work in conjunction with long and wordy Shakespearean text (Boyet’s monologues were not easy business!)

Under the direction and support of Brian, Shelby, Emily Heald, and The Trombleys who directed Midsummer, I found my fire as an artist…And that my friends, is probably one of the most important discoveries I have made in my journey as a human being and artist. We all have this burning fire inside us residing somewhere low in our abdomen connected straight to our heart, yet some of us can’t see it. I didn’t quite see it, but during my time at Brelby I found it, and made the choice to stand fully behind it. As an artist, I have a lot to say, and many stories to tell, and Brelby not only provided a space for me to build myself while telling some of these stories but also is a space where important stories are constantly being told. My heart bursts with gratitude as I write these words for hopefully so many people to see and be inspired to become part of the Brelby family.

Dear Brelby, Thank you for existing. You change many lives. You changed my life.

I LOVE YOU, Tati