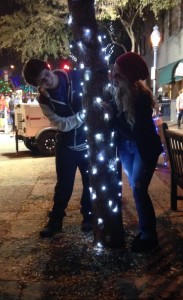 We know, that sounds totally cliché, but it’s exactly how we ended up at Brelby.

Being the only students in our high school theatre department that are branching out before graduation, we certainly raised a few questions. We come from a certain theatre background that is either one way or no way. When we were ready to give up on our theatre careers, DJ Hall, Kristiana Faddoul, and Jamie Terran introduced us to this amazing theatre. At first we were completely terrified of meeting Shelby and Brian, but we knew this was what we wanted, this was where we wanted to be. We had our first meeting with Shelby and Brian at the end of May when we were welcomed with open arms. As the official stage managers for Little Shop of Horrors we were at the least intimidated. We have always been surrounded by high school students, so being around a cast and crew of mainly adults with such talent and experience was a major transition. To further emphasize our transition, we soon discovered that we would be working with not only one but two full casts. With six sassy doo-wops, two wacky dentists, and many man eating plants, we would not have changed anything for the world. Looking back now, we know that Little Shop was only the beginning of our adventure. 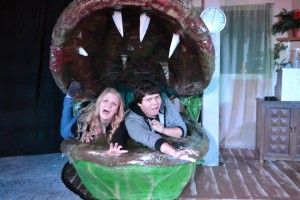 Although, contrary to popular belief, we are not permanently attached at the hip. Since Little Shop Erin has taken what everyone at Brelby has taught her and worked towards bettering herself, and her current high school department, which seems to be falling apart. But don’t you worry Brelby has not seen the last of Erin Coen, she might be in the audience for now but she can’t wait to jump back stage, on stage, or even in box office… where ever she is needed and working with the incredible people in this ever so welcoming environment that Brian and Shelby have created for artists everywhere. She wishes to thank Brian and Shelby for welcoming her to Brelby with opening arms and encouraging words.

As for Zach, he has been given amazing opportunities. He was casted as Boots in ‘Revenge of the Space Pandas’ being his acting debut, he met amazing people and gained friendships that he treasures. The experience was very different but he loved every minute of it. He was finally achieving his dream of being an actor. A dream not everyone supported. People who should be rooting for him at his side, everyone from family members to theatre directors, instead claimed his dream was unrealistic. 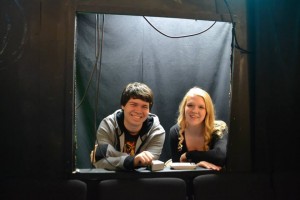 However, he continues to fight for his dream and took the initiative to leave his high school theatre department knowing it caused a great deal of pain and depression in his life and his close friends. He is currently working as stage crew for ’12 Days of Christmas’ which is so freaking cute! He has Megan O’Connor to thank for that. Brelby has become a large part of his life and he hopes it stays that way. He thanks Shelby and Brian for everything they have done and for allowing him to express his love of theatre.

Brelby opened up an entire new world for us. ‘A WHOLE NEW WORLD!’

Sorry, we had to breakout into song somehow.

Back on topic, we are thankful for the memories formed and the relationships established and we look forward for the years to come. Even if we end up going to college far away, Brelby will remain our theatre home and always be in our hearts.