For the rest of November, every day, the Brelby Buzz will be bringing you the second installment of the November Blogathon. Thirty days, thirty original posts from Brelby’s Company Members and collaborative artists of Season 8. Each post will revolve around a word that artist considers to be integral to what art and Brelby means to them. 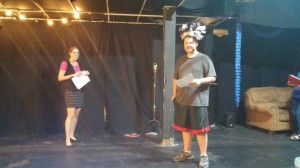 I moved to Arizona in the summer of 2013 to begin graduate school at Arizona State University in the Master of Fine Arts program in Dramatic Writing. That October, I stepped through Brelby’s doors for the first time as an audience member for Through the Mist. I was immediately taken by the charm, energy, and wonder of the production. Looking back, I had no idea that I would join in the company’s efforts to imagine, create, and inspire as a playwright, dramaturg, educator, and performer.

I am thankful to be a part of the 2nd Annual November Blogathon to discuss my word—failure—and how it relates to my writing. I will do my best to provide you with a glimpse into how failure inspires my art. You may be wondering, “What does failure have to do with art?” In my opinion—everything.

“Mistakes are the portals of discovery.” – James Joyce

Failure is a nasty word. We typically don’t wake up in the morning and think to ourselves, “I can’t wait to fail at something today.” That doesn’t feel inspirational. In fact, it may feel depressing or overwhelming. “Oh my goodness, I can’t do that,” we convince ourselves. “If I try to do that, I might fail. I can’t deal with failure, so there’s no point in starting.” This is how I used to think about writing…and about life in general. 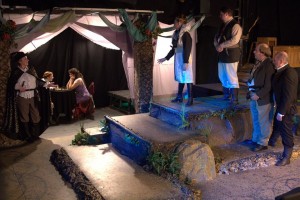 I originally took an interest in writing plays as an undergrad. I began by writing short pieces—mostly scenes. I wasn’t trying to write plays in order to submit them or to share them with other people. I was writing for me. I looked at my plays the same way I looked at my poems—something private and personal that no one would actually care about—and I didn’t see that in a negative light. I usually wrote to understand life and what was going on around me and in my head…it was terribly selfish…but the process of writing was rewarding.

When I was in college, there was an opportunity to take a playwriting class with Joseph Robinette. I knew Dr. Joe to be incredibly kind and a successful playwright, so I thought, “I should probably do this.” It didn’t take long for the fear to set in…I’d have to share my work with others! If I shared my writing, then classmates would have opinions! Based on what people might say…I could fail! It was the first time that I was going to share my writing for the stage. What if they hated my writing? Would I start to hate my writing?

The class was incredible and showed me that playwriting could be about experimentation, paying attention to ideas, and persistence. The greatest lesson was persistence. I learned that I should always try in order to see what happens. I should always be honest with myself and make the attempt. Coincidentally, this is how I live my life. It’s like that lyric from Wicked, “But till I try, I’ll never know.” 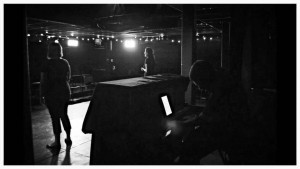 In the beginning, writing exercises felt like failures, but they were never failures to my professor. Dr. Joe saw ideas and writing as potential. If we can see the potential in our writing and if we are committed to persist in bringing out that potential…how wonderful that could be! That was the lesson! It wasn’t about cranking out something good on the first try. Writing was no longer about good and bad—success and failure. Failure was encouraged because it was a part of the process. I learned to welcome failure, to seek it out, to pay attention to its potential, and to persist in my writing. The real failure was doing nothing.

That was 10 years ago. I kept failing. I kept persisting.

I continue to seek out failure as a writer. I try to follow my instincts, do what I think is right (without thinking too much), and see what happens. Then, I assess what I’ve done and figure out a way to improve. If I fail, so what? I learn something new and now I can move on. I always find more of what doesn’t work than what works—that’s true for writing and for my life. Although, I’m much better at rewriting my plays than editing my life. Both are works in progress, I imagine…

I’ve written a new play that premieres at Brelby this February—missing grace. I am currently preparing to do a rewrite of the play. I have reviewed the current draft, brought it to a writer’s group, and I’ve received feedback on areas of the play that are confusing or unclear. Through all of these steps, I’m actively looking for what’s not working—for failure. Sometimes it is difficult for me to hear feedback as a writer. Although I try to put on a good game-face, it often feels like I’m the failure. That’s the norm and something I push through. I have to take deep breaths, talk to people I trust, and summon up the courage to persist. It’s not an easy thing to do, but it is part of the process. Ultimately, once the fresh open wounds of criticism scab over, I’m able to absorb the most important feedback and figure out how it speaks to me. I try to interpret feedback in ways that are helpful to my point of view. There are always areas of the play that I want to focus on. If I’ve received feedback on a similar area of the play, I try to find common ground with the feedback I’ve received and get to work.

I often encourage those I work with to experiment. Many conversations will begin with, “What do you think of this? I’m not sure about this.” My response is usually the same, “Try it and find out.” This is true for many areas of the theatre, whether it’s an acting choice, a design, an idea for staging, or the beginning of a new play. Artists should persist—follow instincts, make choices, and then respond to those choices. Again, the real failure is doing nothing.

I look forward to continuing to work at Brelby as an artist and an educator. There are multiple plays that I am currently developing toward final drafts. I will have time in the spring to start new projects and I’m curious to see how they will manifest. The artists at Brelby are inspirational toward my work. I have no doubt that Brelby will impact and shape my ideas. I have a few possibilities currently marinating…

This year, I’m hoping to offer playwriting workshops at the theatre and to continue instructing playwriting in Brelby’s production intensives. If you are interested in participating in any of these opportunities, I can promise you a safe and supportive environment that encourages you to follow your instincts, to experiment, and to use failure as a natural part of a successful process.

Perovich received his B.A. in Communications: Radio/TV/Film from Rowan University and his M.A. in Educational Theatre in Colleges and Communities from New York University.