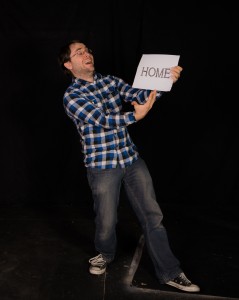 Our Brelby story begins exactly where you’d hope…in a theatre.

Brian and Shelby met in passing when he visited NAU to audition for scholarships during his senior year of high school, but it was backstage where their friendship began.

Brian and Shelby met working on the crew of NAU’s 2004 production of Cinderella, where Shelby was the Assistant Stage Manager, and Brian was on the running crew. (Insert obligatory joke here about Shelby continuing to tell him what to do for the rest of their lives…or about meeting her Prince Charming during a production of Cinderella). A friendship grew over a shared interest in Neil Simon, and Shelby lent Brian her copy of Rumors. (The couple later named their first dog, Rumor, in honor of this experience.)

The term Brelby was actually coined during a bowling game, when they played on a team, in the early stages of their relationship. Our friend Mac decided to blend our names, a la Brangelina, and thus Brelby was born. We’ve been called Brelby ever since.

During our final year at NAU, Brian was completing and mounting an original full length play as a part of his capstone. Throughout the process of workshopping Playing Games, we came to a realization that our journey through our undergraduate studies had shown us that we loved producing and leading just as much as we did creating art. We both had a strong desire to create an organization that would not only provide a vehicle to produce Brian’s plays, but would support other local artists in their respective journeys.

Thus, the inspiration for Brelby was born. We held an informational meeting in our apartment with a cluster of interested artists…many who would go on to perform, design and create with us in the coming seasons: Luke Gomez, Alex Oliver, Jaymie Chavez…we had a great group to start our journey…

…and we had no idea what we were getting ourselves into.
Coming soon: Our Brelby Story, Part II