Queen of the Day

Brelby Theatre Company is all about positivity and building up our artists and we are especially dedicated to promoting our female artists and as such we have Brelby Artists nominate one new woman every month for us to treat like royalty. The power of women as actors, designers, writers, directors, creators, and people in general cannot be overstated and we decided for this season we would have our Queens interview each other and we at the Brelby Buzz are so excited to have May’s Queen, fresh off her performance as Mary Magdalene in the girl power Studio Show After Hours at Rosie’s Pub, Kay Gray, interview our Queen for the month of June, her Rosie’s Pub co-star, Jen Gantwerker. Jen is a collaborative artist at Brelby, first seen on our stage in last years production of The Tempest, and she has since remained a Brelby favorite returning to take on the magical role of Dr. Rosalind Franklin. She sits down with Kay to talk about feminisim, acting, and being royal. We’re so glad Jen came back to work with us and hope she brings her talent around more often. 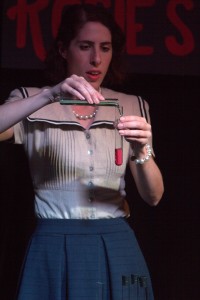 Kay Gray: First of all, I know that The Tempest was your first role at Brelby, what brought you here to begin with?

Jen Gantwerker:  I am a Shakespeare nerd, and when I heard someone was doing The Tempest, I HAD to audition. Lucky for me, Brelby turned out to be an incredible artistic home that I’ve been fortunate enough to get to come back to a second time!

KG: When you first started acting, what was the catalyst for you? What is it that drives you?

JG: At age 8, I started going to the Summer Stars acting camp in Buffalo Grove, Illinois. We did original, social issue-based musicals every summer. Then I studied it in high school and college. I just knew it was what I was supposed to be doing. My relationship to acting changes, but right now I’m taken by the opportunity it offers to experience life beyond the limits of my personal narrative. It’s difficult to articulate just how amazing that is to me.

KG: During Rosie’s, you shared a bit about a charity that you are a part of; can you expand a bit on that?

JG: When I was at USC, I fell into a leadership position with an organization called Human Rights Action. We raised money for and awareness of human rights catastrophes around the world. We also worked with other like-minded organizations on larger events like ‘Take Back the Night.’

KG: Very important work. It sounded during your Rosie’s share, that it’s not only very important to you but had a hand in shaping why you consider yourself a feminist.

JG: The people I met through this work, and the stories I learned, opened my eyes to the awful ways in which people, far too many of them women, can be treated in this world. So I’m a feminist in that I believe that we are all equally human, and deserve to be treated as such. But what was also drilled into me back then is the conviction that noticing injustice has value, and caring about it is important, but taking action is the essential third step. We can create the world in which we want to live.

KG: That’s an incredible lesson we all need to learn. If you were actually Queen of the world, with what Queen from history would you identify?

JG: I’m tempted to say Marie Antoinette, because I think we should all eat cake. But more likely Catherine the Great – it’s rare to be referred to as an “enlightened despot.”

KG: Nice! Thank you so much for being an amazing queen of the day!!! I am honored to call you friend!!!

Our thanks to Kay and Jen for sharing their chat with us! Look on the Brelby Facebook page every month to vote in our poll for our next Queen of the Day!