Brelby is pleased to announce the lineup for our 8th Season, premiering in 2016. As the West Valley’s new works incubator, we are proud to be producing the world premiere of 9 pieces by playwrights with ties to the Arizona arts community.
***Indicates a world premiere*** 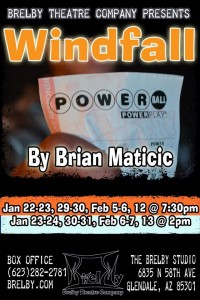 Synopsis: Owen and Trent have been through everything together, and throughout their friendship, Owen has always been the stable one. Trent, a lazy but charming young man, decides to dodge his debt by faking his own death, leaving behind his best friend and fiance, Olivia. However, just after the deed is done, Trent wins the lottery. In an effort to collect his winnings, he attempts to enlist Trent’s help. Is Trent finally fed up with Owen’s antics? Join us for a dark comedy about friendship, responsibility, and luck. 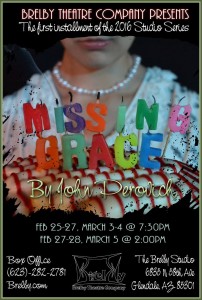 Synopsis: Grace and Robert Davis maintain pleasant smiles while their legacy as suburban royalty fades. They may have the perfect house, the perfect lawn, and the perfect roses—but looks can be deceiving. Today is the anniversary of a tragic event that sent the Davis family into a downward spiral. Nonetheless, a celebratory cake is in the oven, a child’s birthday decorations are going up, but no one’s there to blow out the candles. Unexpected surprises erupt in this play about family, honesty, and new beginnings. 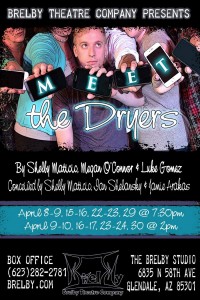 Synopsis: Meet the Dryers follows the story of James, an introverted 14 year old, who finds solace and acknowledgement through the extreme embellishment of stories about his real life family for his followers on Reddit. Our audiences will experience the fantastical world of James’ imagination played out onstage, as well as a glimpse into the personalities of his quirky family through their social media interactions, displayed prominently on the stage for the audience to see. When his stories begin to spin out of control, James begins to question whether he is in control of his online presence, or whether it is controlling him. Meet the Dryers is an exploration of how social media impacts our lives, no matter which generation you hail from. 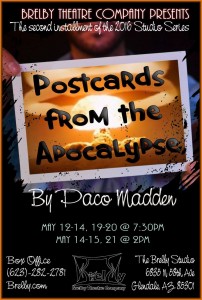 ***Postcards from the Apocalypse***

Synopsis: A young man, Marco, waits for his girlfriend, Jenny, atop a mountain. As the world collapses around him, he receives postcards and other messages from Jenny who reports back on what she’s seen and heard from the End of the World. 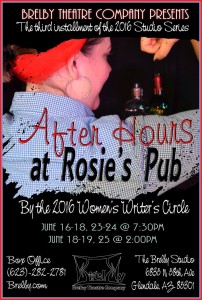 After the lights have dimmed, and the early crowd has left the scene, Rosie’s Pub is frequented by a medley of female revolutionaries from throughout history. As they take the stage for an unconventional open mic night, they tell their stories through song, poetry, and narratives. Their individual histories weave together, and allow them to pose questions about today’s world. Its history like you’ve never heard it before, and these women have a lot to say. 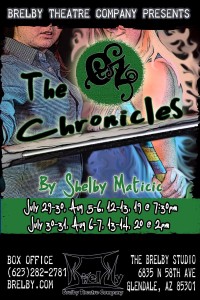 Synopsis: Our Season 8 summer epic will intertwine the original Oz series into a unique adaptation of the classic stories. Inspired by L Frank Baum’s unique and engaging world, Brelby’s take on the original American fairy tale will feature epic themes of good versus evil, new interpretations of classic characters, and the creative combat that our audiences have come to love and expect from our summer epics. 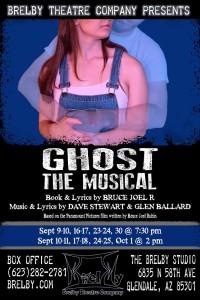 Book & Lyrics by Bruce Joel Rubin
Music & Lyrics by Dave Stewart & Glen Ballard
(MainStage)
Directed by Shelby Maticic
Synopsis: Adapted from the hit film by its Academy Award-winning screenwriter, Bruce Joel Rubin, GHOST THE MUSICAL follows Sam and Molly, a young couple whose connection takes a shocking turn after Sam’s untimely death. Trapped between two worlds, Sam refuses to leave Molly when he learns she is in grave danger. Desperate to communicate with her, he turns to a storefront psychic, Oda Mae Brown, who helps him protect Molly and avenge his death.

Synopsis: The witches prophesy that Macbeth will be made thane (a rank of Scottish nobility) of Cawdor and eventually King of Scotland. They also prophesy that Macbeth’s companion, Banquo, will beget a line of Scottish kings, although Banquo will never be king himself. Join us for this epic tale of desire, betrayal, and the struggle for power next Halloween.

Quest for Claus: the musical***

Synopsis: The Quest for Claus is a unique holiday tale from the creative minds at Brelby, shown through the eyes of a young boy on Christmas Eve. Come and enjoy a brand new Santa Claus origins tale about how young Nick sets out on a journey with his best friend, Jack Frost, to become the mystical figure we all know and love. Filled with familiar characters from the Nutcracker and Clara to the Abominable Snowman, this action packed story has something for everyone. Join us for a brand new version of this story, now a musical theatre adventure! 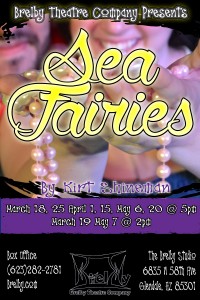 Synopsis: “Sea Fairies,” by Kirt Shineman is loosely based on L. Frank Baum’s novel of the same name, and short story, Prince Mud-Turtle.

The show is set on the coast of southern California when the orphan, Mayre Griffiths, nicknamed Trot, encounters some mischievous classmates. The mean boys play “keep-away” with her newly crafted pearl necklace. She freezes, and cannot defend herself. Her constant companion Cap’n Bill, a retired sailor with a wooden leg, comes to her rescue. After scaring away the boys, Cap’n Bill confronts Trot about a visit he and Trot’s mother received; Trot’s teacher and principle came to the house looking for Trot, who had not been to school in weeks. Why? Trot explains she’s spent most of her days roaming the beach, avoiding the bullies, and swimming in the ocean, diving for pearls, and she even found a large pink pearl. Concerned, Cap’n Bill rows the two of them to where Trot found the infamous pink pearl. Trot and Cap’n Bill are attacked by SeaDevils, sent by the evil magician, Zog. They are forced to row into the forbidden Giant’s Cove. There the mermaids rescue Trot, and the distressed Cap’n Bill, and take them to visit to their land in mermaid form. Trot is enthusiastic, and Bill is too loyal to let her go off without him. Thus begins their adventure with the Sea Fairies as Trot learns about the ocean animals, the beauty of the deep, surmounts her grief over the death of her father, and through it all she finds the strength to take on the local bullies.

Synopsis: Inspired by Peruvian folklore, myths and culture, The Sun God’s Coin follows a young girl, Tamaya living an average life in the countryside near Cusco, nestled in the Andes mountains of Peru. Cusco was ruled by an evil king, obsessed with riches and glory, who mistreated the animals of the forest that the people of Cusco loved dearly. When the king decides to destroy their homes to build a golden city, the sun god seeks out Tamaya’s aid.