The Brelby Theatre Company was founded by Brian Maticic and Shelby Brimhall (now Shelby Maticic) in the Spring of 2009. 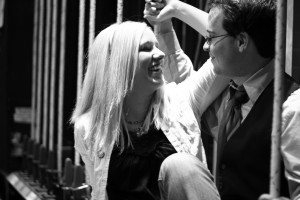 The two met while studying theatre at Northern Arizona University, and bonded over an appreciation for taking a well-rounded approach to the art form. The duo decided that they wanted to be able to create their own opportunities to challenge themselves artistically. Thus the mission of Brelby was born, to provide directors, writers, designers and actors with a safe environment to enhance their creative abilities and explore their talents through the creation of live theatre. Brelby began their journey in Flagstaff, AZ where its inaugural group of eclectic collaborators joined together to produce its first season, showcasing their work in Flagstaff, Kingman and Phoenix.

Brelby planted roots in the historic downtown Glendale community, officially opening their doors on February 14th of 2013. With a core ensemble of 16 company members, and larger family of over 100 collaborative artists who have contributed to Brelby’s MainStage productions, the future is looking bright. The Brelby Theatre Company produces year round in its blackbox studio, and looks forward to continuing to bring art to the West Valley community for years to come.

2016 saw Brelby move to our new location in the Catlin Court District of Historic Downtown Glendale where we continued to produce, educate and imagine for several years.

During the pandemic, Brelby reassessed our goals and sold our venue. Now working as a nomadic independent production company, we are excited to be taking our original fairy tale, Luna & Solis to our first festival in 2022, the San Diego International Fringe Festival.